Had some fun. Had some laughs. 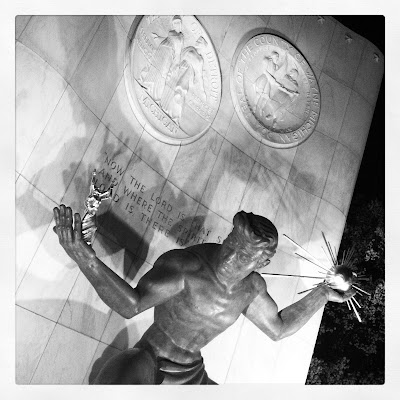 John Lennon once said -- and millions of people subsequently quoted him -- that life is what happens while you're busy making other plans. A cliché, sure, but as someone else once said, the cliché is cliché for a reason. Or something.

A New York native, I first set eyes on Detroit in October 2000. I've spent the last 11 years in and out of the shadows here in the Motor City, pursuing a career in New York City while not-so-privately obsessing over one of the most unloved cities in the country. Looking back, it's easy to figure out why. As a reporter, I saw Detroit as one of the greatest untold stories in the United States.

As happens in this business, professional curiosity can often take you some really unexpected places. Over time, I fell in love with Detroit in a way I never expected to. The city so many were busy fleeing began to feel like home.

I made repeated attempts to transition from being a part-timer, ducking in and out between trips around the globe, trying to see how I might move in for real and settle down. It never seemed to work. The more I came to know Detroit, the more I loved it -- the good and the bad -- but I never felt one hundred percent sure that throwing my pretty good job away and moving to Michigan was a great idea. Anyone who's tried to keep a news career going in Southeast Michigan over these past ten years can no doubt identify.

While I dithered and planned and scrubbed plans and started all over again, times changed. Detroit changed. The city, long left to its own devices, emerged from the shadows. As the economy fell apart in 2008, with the auto industry front and center for the drama, national media types once again took an interest in a city that had been all but forgotten in the decade or more prior.

Soon, Detroit became a thing. Reporters swooped in, trying to make sense of it all, after years of being completely tuned out, often missing the point entirely as they drove around the ruins, writing off the city for dead. (Unexpectedly, it would be a Chrysler commercial that finally showed the world a proper glimpse of Detroit's incredible humanity.)

The word itself -- Detroit -- became hip. Artists flocked in. A new generation of entrepreneurs began to take chances. Downtown, already with so much going for it, flipped into high gear. Then came Whole Foods Markets, announcing a Midtown store -- a curveball that threw even the sunshine-loving city supporters for a complete loop. Today, I read New York-based Curbed Networks' new Detroit real estate blog for the first time, along with many of you. (Another thing to file under things you didn't expect to see around here, any time soon.) Suddenly, Detroit is cool. Suddenly, everyone is saying it is the new Brooklyn. I don't know if that's true. But if that's what people need to tell themselves to get psyched up to come hang out in the city and make it a little better, than so be it.

All I ever wanted, from the very start, was for the world to stop ignoring Detroit. Today, I look around at a city that still faces unbelievable odds, odds it probably won't completely overcome for generations, but I see a city with a brighter future, something I never dared think about, after learning the hard way the perils of treating Detroit as if it were like any other place in the United States.

Today, though, no matter what happens, Detroit is once again part of the national (and global) conversation. This is all that could ever be asked. Magical solutions to its brokenness do not exist. And at day's end, Detroit must save Detroit. But I now take comfort in the fact that the world will be watching, lending a hand where it can, if Detroit will let it do so.

With so many changes both here and in my own life, I'll be moving on for the most part, leaving this blog to internet history. I'll still be involved locally in at least one very fun (and to me, very important) way, working with Eat It Detroit, a local outfit that celebrates Detroit's rich food culture and heritage. Join the conversation over on our Facebook page, if you can.

In summary and in closing, thanks to all of you who read this blog over the years, It was incredible to see the traffic transition from almost entirely local in 2007 and 2008 to an international audience in the years that followed. I hope this did some good. I hope someone learned something. I know I did. Peace.
Posted by David at 7:09 PM 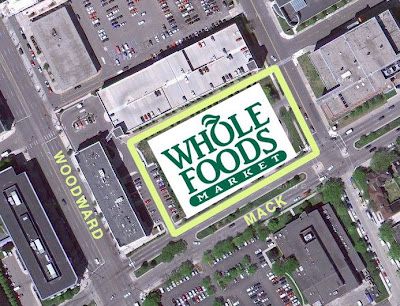 Pigs really can fly, because the city of Detroit is getting a Whole Foods. Seriously. Corner of John R and Mack, taking up the space that was the Chase Bank, as well as that vacant lot between there and the parking lot behind The Ellington. Predictably, this announcement means a lot of complaining. Detroit is like that. Bless.

#1 THE PRICE ISSUE. Whole Foods' 365 Brand products are generally pretty affordable and always of good quality. An excellent store brand that even the most die-hard cheapskate can buy regularly. Things like organic instant oatmeal for about $2 a box, half gallons of great-tasting organic juices for $3.99 a carton, massive packages of pasta for $.99, storemade hummus for $1.99 a tub, organic wheat crackers for about $2 -- the list goes on. The quality is outstanding, and if it costs a few pennies over another chain store's generic brand, then so be it. I can taste the difference, and so would anyone who gave it a shot. But instead, too many people get hung up on their expensive prepared food and some of the very pricey produce. You don't have to buy that stuff if you don't want to. Then again, it is easier to whine than it is to become a savvy shopper. Whatever. Go peddle your nonsense somewhere else, because you're wrong.

#2 THE SIZE ISSUE. Some people have wondered if 20,000 square feet -- the size of the planned Detroit store -- is too small. Again -- welcome to Detroit, where nobody knows shit about shit, but is happy to chat to you anyway. Fact: The Maple Road store, as in, the closest one to Downtown Detroit right now, is only 23,000 square feet. It's got everything you need. I should know. I shop there all the time. I'm thrilled to be able to not have to do a nearly 35-mile round-trip to buy my cheap, organic store brand dry goods anymore. (Well, I will be, in 2013.)

#3 THIS ISN'T REALLY ABOUT YOU. Even just the announcement of this store is an immense brand boost for the city. Bigger than many people realize. It's not just a grocery store opening. Whole Foods is one of the most upscale brands in the country. Having that attached to Detroit does things for this town's image on a national level that even the most well-meaning, community-involved, PR-savvy Detroiter never could. Detroit's growing reputation as a cool new frontier town/art center/fill in the blank is great and all, but that is not going to save Detroit alone. People with money are going to do that. People who shop at places like Whole Foods. Show those people that something like this could thrive in the city of Detroit, and suddenly, they're feeling a lot more at ease.

You don't have to like any of this, but then again, it isn't really about you.
Posted by David at 11:10 PM

It has been said more than once that one of modern Detroit's finest features is all the extra space on the road for cyclists. This is a true thing. Check out this charming documentary short by Alex Gallegos that highlights the Motor City's growing bike culture.
Posted by David at 10:43 PM 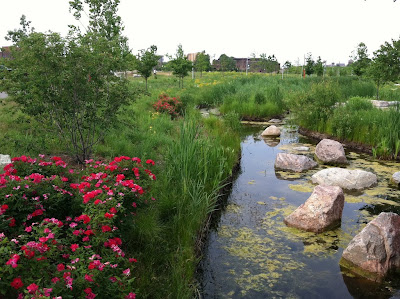 Summer on the Riverwalk.
Posted by David at 11:02 AM If only everyone senselessly murdered in Detroit had someone who cared enough about them to raise hell.

That's the lesson, maybe, from the whole Greg McNicol drama. One week after the Aussie landlord was shot and killed in front of his apartment building at the corner of Canfield and Beniteau, the DPD booked Freddie Young, 62, for the killing. Swift justice? How un-Detroit!

Then again, the plan to murder McNicol wasn't exactly foolproof or smart. Broad daylight, witnesses, happened while he was arguing with a deadbeat tenant in front of the building. If the cops couldn't pin this on her, they shouldn't be cops.

Can't help but wonder though, how much it pissed off City Hall to have Australian politicians calling and sending letters. Or to see the grieving widow stage a presser (pretty much) at the crime scene. Can't help but wonder if things like that greased the wheels just a tad.

The way the Australians and McNicol's family fought back, even if only in a small way, the fact that his widow refused to be scared off, raises a really sad and interesting point. After all, how did Detroit react? Same as usual -- for every one person who felt something, anything at all, there were nine more who heard the news, maybe muttered something under their breath, something about lying down with dogs, and changed the channel.
Posted by David at 6:59 PM

Detroit! It's so much more than:

The Chrysler ad that changed everything

10 totally rad things to do in Detroit right now

Everything on the blog is the sole property of the blog, including the f*cking copper. Violators will be forced to Buy American.

Certain things were said (that cannot be unsaid)

"A sobering, beautiful look at the city...well worth the visit."

"A skewed view on Detroit's political and economic blunders."